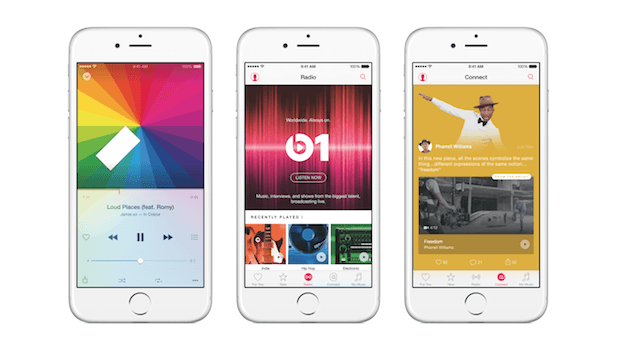 Yesterday saw the highly anticipated announcement from Apple that it will be rolling out a new music service on 30th June 2015.

Apple Music will be a single app, combing a streaming service, live radio station and curated playlist in one.

The music streaming part will give you access to the entire Apple Music catalogue across all of your devices – so you can stream anything from the iTunes Store and also listen to all those old ripped CDs added to your account. In total there are over 30 million songs in the catalogue and you can either browse yourself or take a lazier option and let Apple create a playlist for you. Apple is placing a huge emphasis on the curation element, hiring in experts from across the world to create playlists based on your preferences, which then work hand-in-hand with a tech algorithm to improve the relevance of songs recommended based on what you listen to in real-time.

Siri will also play a part, giving you the option to ask for songs from days gone by such as the number one song on your birthday.

Sitting neatly alongside the streaming service in the app, Beats 1 will be Apple’s first ever live radio station and will broadcast across over 100 countries. Apple has got industry talents such as Zane Low involved to make sure the experience is second to none, with exclusive interviews and guest hosts alongside handpicked music played throughout the day. There will also be other new stations catering to different genres, with the option to skip through songs you’re not a fan of.

The final noteworthy point is Apple will give artists and fans to interact directly via the app with Apple Connect. Artists will be able to release songs and videos, where as fans can comment on anything an artist has posted. If you’re lucky you may even get a direct response from the artist.

To help boost signups from day one, Apple will be rolling out an initial 3 month free trial. The cost after the trial ends will be $9.99 (circa £6.50) per month, but for just $14.99 per month a family plan will cover up to six family members.

This compares to Spotify and Tidal, both at £9.99 per month. Spotify is currently Apple’s largest competition in the music streaming space, amassing 15 million subscribers since launch. Although Apple is late to the party, they have a potential audience base of 800 million people so may take a hefty chunk out of Spotify’s numbers.

You may expect rivals to be worried, but Spotify appear pleased that Apple will help to make music streaming more mainstream, which can only be good for business.